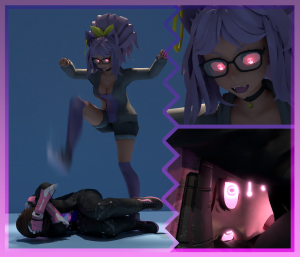 During PokeCat’s 156 hour long subathon stream, a goal was reached where PokeCat would create a 3D render of anything her community wanted. They voted for Marysquid stopping Six into the dirt.

While this was a strange interaction, it was a fun one that PokeCat rendered three different perspectives for, creating a fun and interesting image after some light photoshop editing.

It is one of the only renders featuring more than one perspective.