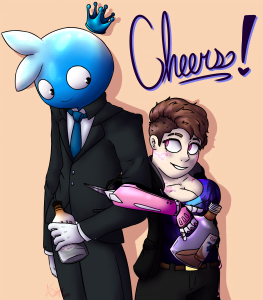 After meeting Shme for the first time, the two managed to bond rather quickly and even shared a drink on stream. Later on, the two became drinking buddies. They’ve been friends ever since. This piece features the slime in a suit and the cybernetic vigilante in a friendly pose sporting their drinks of choice.

This is a recreation of a similar piece PokeCat had done the night before, however at the time of the creation of the original, she was drunk and wished to improve it while sober.

The original piece features much sketchier and quick shading, as well as a slightly different pose of the two actually drinking from their respective drinks, with Six struggling to drink her’s.